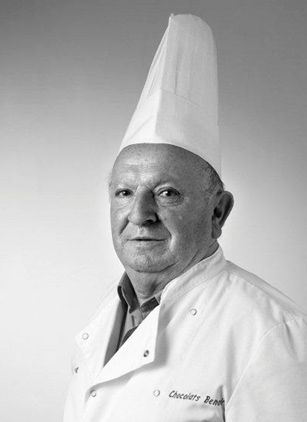 At the head of their own bakery for ten years, the parents took in 1975 the ambitious decision to launch a chocolate factory right in the heart of Angers. All the chocolates were made directly on site by the father, Gilbert Benoit. From their earliest days, the three children grew up in a chocolate environment, helping out from time to time at the shop or in the laboratory. Anne-Françoise, the younger daughter, first started a career in the world of economics, but eventually returned to Angers in 1997 to take over the family business and quickly became the head of the company. Not only did Anne-Françoise Benoit manage all the commercial and financial operations of the parent company, she also decided to become a chocolate maker herself, and to take the helm of the chocolate production. In 2009, she persuaded her older sister, Véronique, to join in the family chocolate-making saga and together, they opened the first Parisian branch of “Benoit Chocolats” in rue Saint-Antoine, in the 4th arrondissement.

Today, the chocolate makers family Benoit Chocolats is listed among the 100 best chocolate makers in France, and has been perpetuating its hand-crafted savoir-faire since 1975. In Angers or Paris, experience the authentic taste of chocolates and macaroons, and discover our new speciality, the original Caramandes ®

It all began in 1975 when Gilbert Benoit and his wife opened a chocolate and confectionery shop in Angers, rue des Lices.

They produced their chocolates right above the shop and always set up spectacular and mouth-watering window displays just over the shop with its spectacular and mouthwatering window displays. Their three children grew up in this chocolate environment, helping out occasionally in the shop and the laboratory. While the eldest son was the first one to learn the craft of chocolate making, the younger daughter and her older sister took their distance for some time from the family business to pursue their studies. For Anne-Françoise, who intended to pursue a career in human resources, the separation was short-lived. Angers and chocolate-making called her back and she quickly warmed to the idea of running the business herself.

After graduating a Master’s degree in economics, Anne-Françoise worked for a while as an intern with Parisian chocolatiers before deciding to take the plunge. That was in May 1997. Initially assisted by her father, Anne-Françoise quickly learned the art and craft of chocolate-making. In 2003, she was awarded the “young talent” prize at the Chocolate Fair by Mr Colaneri, president of the “Club des Croqueurs de Chocolats” (Club of the Chocolate Munchers), and by Mr Linxe, Master Chocolatier and founder of La Maison du Chocolat in Paris. After that, she never looked back, and went on to grow and develop the business.

In 2004, she opened a second shop on 33 rue Saint-Aubin, specializing particularly in macaroons and crunchy chocolates. The following year, at the Paris Salon du Chocolat, she won the first prize in the ganache category with her “Concerto”. To keep up with the needs of her growing company, Anne-Françoise invested in 2007 in a brand new 300m2 laboratory on the outskirts of the city.

She took another giant step in 2009 when she and her sister Véronique Taverne created the “Société Benoit” in the 4th arrondissement of Paris and opened the first Parisian branch in rue Saint-Antoine. Quality and excellence of her chocolates has always been and will always remain the number priority for Anne-Françoise. And you can tell by the fact that she was elected one of the 12 best chocolatiers in France by the 2010 Chocolate Guide published by the “Club des croqueurs de Chocolats”, the Express Style and the Salon du Chocolat. Finally in 2014, she received the ultimate recognition as she was awarded best chocolatier by the “Club des croqueurs de Chocolats” at the Salon du Chocolat. The latest original creation of Anne-Françoise, the Caramande®, is a perfect example of the passion, the innovative spirit and the skills that she puts into everything she creates. The success and craze for this specialty gave way to new opportunities for the company on both national and international levels. It is in this context that in November 2015 a second shop opened, in the 6th arrondissement of Paris rue de l’Ancienne comédie, entirely dedicated to Caramandes®, called Caramandes’In.

Anne-Françoise now exports her creations everywhere around the world, especially the famous Caramandes®, from Japan to the United Arab Emirates. 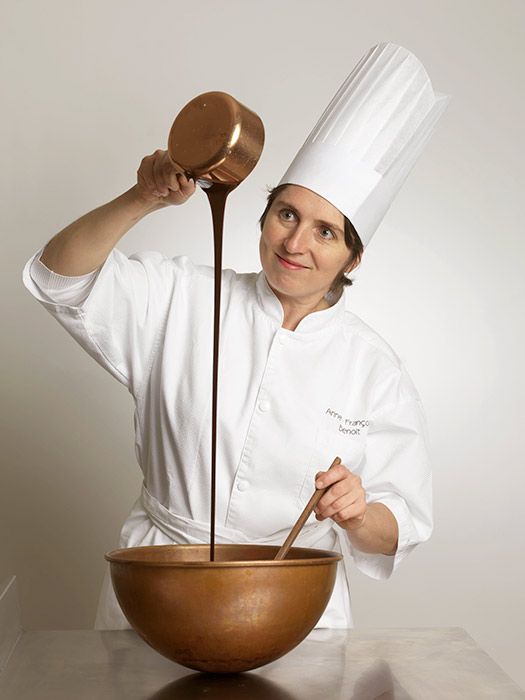 Our chocolates are prepared with cocoa beans that come straight from sunny regions (Ecuador, Brazil, Venezuela). Our chocolates are available in no less than 70 different flavors, from deliciously sweet to strongly bitter. The quality and prestige of our products is the result of more than 35 years of skills and experience.

taste, savor a Benoit chocolate and enjoy a moment of intense pleasure: a unique taste, deep and meltingly soft!